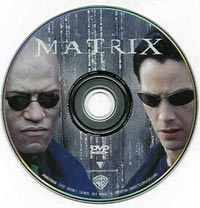 Short for digital versatile disc or digital video disc, a DVD or DVD-ROM is a disc capable of storing a significant amount more data than a standard compact disc. DVDs are widely used for storing and viewing movies and other data. The picture of the Matrix DVD movie disc is an example of a DVD movie. DVD-ROM drives that utilize these discs were first sold in 1997.

To read and play DVDs on a computer, you must have a DVD-ROM drive and DVD player software.

How much data can a DVD hold?

What is the difference between a DVD and a CD?

Physically, a DVD and CD look the same. Both discs are the same size and have a labeled and unlabeled side where the data is read by a laser. However, as was mentioned in the intro, DVD technology allows that same-sized disc to hold a lot more information than a CD.

What DVD player should I get to play movies on my computer?

We recommend VLC, a free and open-source media player that works on Windows, macOS, and Linux. However, you can also use Windows Media Player on Windows computers to play most DVDs.

Does my computer have a DVD drive?

Yes, all DVD drives are capable of reading both CDs and DVDs. If you have a DVD burner, it can also write on CD-Rs, CD-RWs, and writable DVDs.

Opening and closing a DVD-ROM drive 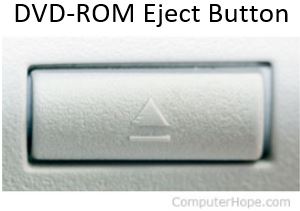 With some computer cases, the eject button may be hidden behind the case to make the case look more visually appealing. If you don't see an eject button, try pressing on the right side of the disc drive, which is often toward the top of the tower.

If the eject button is not working, you can open or eject the tray through My Computer, or "This PC" in newer versions of Windows. In My Computer, find the list of drives in the computer, then right-click the DVD-ROM drive and select Eject in the pop-up menu.

A DVD drive can also be manually opened by inserting the end of the paperclip into the drive eject hole. Insert it gently until you feel resistance, then press in a little further to activate the release mechanism. If done properly, the tray should open a little bit, and you can use your fingers to pull the tray out gently. Manually opening or ejecting the tray can be useful for removing a CD or DVD that is stuck.

The history of DVD

In 1993, there were two video disc formats being developed: the MMCD (multimedia Compact Disc) and the SD (super density) disc. To avoid a video format war, Philips and Sony, the backers of the MMCD, decided to partner with SD disc proponents (Hitachi, JVC, Mitsubishi, Pioneer, and Toshiba). Together, the unified industry group developed and agreed upon the DVD digital video format.

What was the first DVD?

The movie Twister became the first feature film put on DVD on March 25, 1996.

The future of DVD

DVD sales and usage is dwindling in popularity with the advent of more recent technologies, like Blu-ray discs, and streaming services, like Netflix and Hulu. As more people get Blu-ray players and use streaming services, DVDs are becoming more obsolete.