E may refer to any of the following: 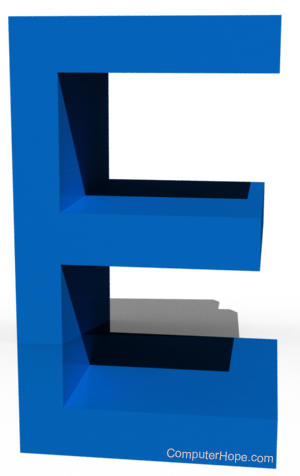 1. Short for Enlightenment, E is a desktop windows manager for X Windows, first developed by Carsten Haitzler in 1997. Enlightenment can run by itself or with other desktop environments, such as GNOME and KDE.

2. E with a hyphen is an abbreviation for "electronic." For example, e-mail is short for electronic mail. See our E- page for further information and examples.

3. E is a keyboard key used with the keyboard shortcuts Alt+E, Command+E, and Ctrl+E.

4. E is an abbreviation of an exponent.

5. With the ESRB (Entertainment Software Rating Board), an "E" rating is short for "everyone" and is a game meant for players of all ages.

6. With a regular expression, \e matches an escape.

7. With Microsoft Excel and other spreadsheet programs, "E" is the fifth column of a spreadsheet. To reference the first cell in the column, you'd use "E1."

8. In Adobe Photoshop, E is a shortcut to select the eraser tools. Holding down the Shift while pressing E cycles through all erasers.

9. E is the SI-derived symbol of exa.

10. In the phonetic alphabet, "E" is often pronounced as "echo."

11. Euler's number (e) is a mathematical irrational number that's approximately equal to 2.71828 and helps find slopes in Calculus and doing work with compound interest. When working with a scientific calculator, this number can be entered by pressing the "e" button.

12. E is the fifth letter of the English alphabet. The letter "E" comes after "D" and is followed by the letter "F." To create a capitalized "E," press Shift and E at the same time.

With U.S. QWERTY keyboards, the "E" key is on the top row, right of the "W," and left of the "R" key. See our keyboard page for a visual example of all keyboard keys.

If the "E" key is not working on the keyboard, see: Some keys on my computer keyboard aren't working.

The number 3 on a phone keypad is used to create an "E" on a US phone.