An emote describes the action of expressing an emotion. On the Internet, this can be done in a variety of ways. Emotes can refer to expressing emotions using images and animated GIFs, small icons like emojis, or through elaborate animations in 3-D video games.

Before modern forms of online emotes became commonplace, users sometimes conveyed emotions by typing messages bookended by asterisks (*). This indicates that an action is being performed, such as crying, laughing, or any other type of body language. Below is an example of a text-based emote like this.

In MMORPGs like World of Warcraft, a player can type "/wave" (forward slash immediately followed by "wave") in the chat window to have their character wave to other players. Other common emotes can include /cry, /dance, /laugh, and /sit. To help find other available emotes, type "/help" in the chat window.

Other game genres, including battle royale games like Fortnite, include emotes as cosmetics that can be purchased using in-game currency or unlocked through a battle pass. Trending dances from platforms like TikTok, and signature actions performed by celebrities and licensed characters are frequently added to Fortnite's store. Games like this usually have a hotkey that allows players to perform emotes quickly. 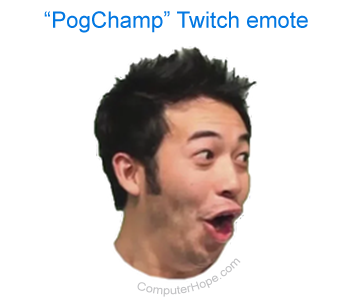 Twitch, a popular live streaming website, calls its library of customized emoticons Twitch emotes. If you type a smiling face :) or frowning face :( in a user's Twitch chat, it automatically is replaced by a Twitch emote expressing the same emotion. In addition to Twitch's default emojis, individual creators on Twitch can add their own custom library of emojis, accessed through microtransactions.

The most notable Twitch emote is the PogChamp emote, which was removed from the platform in 2021.