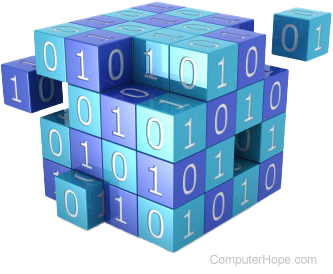 The term encrypt describes making data unreadable to other humans or computers that should not be seeing the contents. Encrypted data is generated using an encryption program such as PGP, encryption machine, or a simple cipher key, and appears as garbage until it is decrypted. To read or use the data, it must be decrypted, and only those who have the correct password or decryption key can make the data readable again.

Why is encryption needed?

You use encryption every day and are even using it now as you read this page. Encryption helps keep your information and actions private from everyone but the recipient of your information. For example, when you enter your credit card information on a web page, you only want to share that information with one company website. Suppose it was not encrypted; as you transmit that information, it could be intercepted and read by a man-in-the-middle attack. However, when the information is encrypted, if it were intercepted, it would be extremely difficult to read because of encryption. Encryption also helps keep stored information safe. For example, if you choose to save your credit card on a website, it's encrypted to prevent any employee or attacker from easily reading the information.

But I'm not doing anything bad, why would I care?

A common argument to allowing authorities the ability to bypass encryption is you're doing nothing bad and have nothing to hide. While it's great you're doing nothing bad, someone capable of monitoring you without encryption could be doing something bad intentionally or unintentionally. For example, even if you are okay with authorities reading all your private messages, you probably wouldn't want a stalker to have that same ability. When a method for breaking encryption is created, it can be exploited by anyone.

There are many algorithms used to encrypt data. For example, a basic cipher known as simple substitution, substitution cipher, or Caesar cipher (named after Julius Caesar) shifts the alphabet letters over a few characters. Below is an example of the alphabet shifted over four characters.

Using this technique, a user could encrypt the message: computer hope free help for everyone to: gsqtyxiv lsti jvii lipt jsv izivcsri. Below is an example of how this could be done using the Perl programming language.

A version of the code above is also available online to encrypt and convert your text.

Below are some other examples of simple encryption algorithms.

How do I decrypt or remove encryption?

To decrypt encrypted data, you must have the key that tells the computer or encryption program how to decrypt the data. Without the key, the information cannot be read or decrypted.

If encryption could be broken without a key, it would be considered insecure, and it would no longer be used.

How do governments bypass encryption?

Those who study cryptography may decrypt weak ciphers using cryptanalysis where the encrypted data is studied, and various methods are used to decrypt the data. However, weak methods like these are avoided because they are known to be insecure.

To break stronger encryption, you need access to a supercomputer capable of performing brute force attacks or using various algorithms in an attempt to break the encryption. However, the strongest encryption still cannot be cracked, even with the fastest supercomputer spending over a hundred years attempting to break one message.

Can encrypted data be deleted?