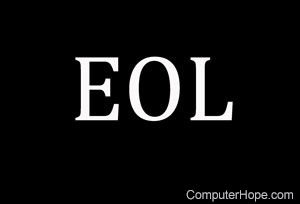 EOL may refer to any of the following:

1. Short for end-of-life, EOL is a label used by software developers and computer hardware manufacturers to describe a product with reached the end of its life cycle.

What is the length before an EOL?

The time a product spends in GA (general availability) before reaching its EOL is all up to the developer or manufacturer, and there is no standard. The length may be only a few years to over ten years.

What happens to a product when it hits EOL?

When a product hits its EOL, the following happens.

EOL software will no longer get updates to new problems. If security vulnerabilities are discovered, they are not fixed and may leave your computer, network, or company vulnerable to attack.

Some enthusiasts may release unofficial patches that fix these problems. However, it would be up to the community and not the original developer to release and support these patches.

EOL hardware will no longer have replacement parts manufactured. It may be possible that there could be excess inventory for a few years after the EOL. However, once the parts run out, you may have no options for repair through the manufacturer.

2. Short for End-of-Line, EOL is a code or a mark user or computer places to indicate the end of a line of text. When formatting marks are shown, the line break or pilcrow is shown at the end of a line. With regular expressions, the end of the line is matched using the dollar sign ($).

You can press the End key (shortcut key) to get to the end of any line of text you're editing.