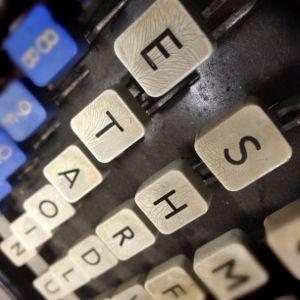 ETAOIN SHRDLU is a made-up phrase, or name, coined as an in-joke by the operators of Linotype machines. It's composed of the twelve most often used letters in the English language: e, t, a, o, i, n, s, h, r, d, l, and u. Because of their frequent use in typesetting, these letters appear on the first two rows of keys on Linotype machines.