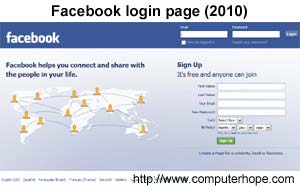 Facebook is the most popular social networking site on the Internet. It was co-created by Mark Zuckerberg and officially launched on February 4, 2004. Facebook is a popular destination for users to set up their personal web pages, connect with friends, share pictures, share movies, talk about what they're doing, etc.

Facebook is often abbreviated as "FB" or "fb." To help prevent confusion to your reader, always spell out "Facebook" in your writing.

You can become a Computer Hope fan and communicate with other Facebook members by clicking Like in the box below or visiting Computer Hope on Facebook.