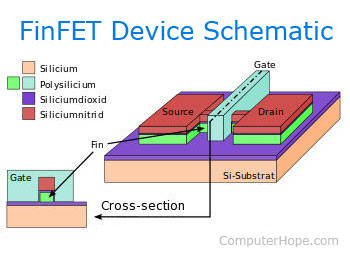 FinFET, also known as Fin Field Effect Transistor, is a type of non-planar or "3D" transistor used in the design of modern processors. As in earlier, planar designs, it is built on an SOI (silicon on insulator) substrate. However, FinFET designs also use a conducting channel that rises above the level of the insulator, creating a thin, fin-shaped silicon structure called a gate electrode. The fin-shaped electrode allows multiple gates to operate on a single transistor.