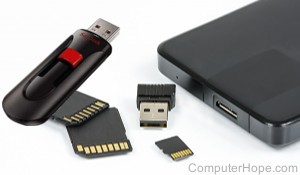 Flash memory may refer to any of the following:

1. Alternatively referred to as flash storage and solid-state storage, flash memory is non-volatile computer memory. It was first invented by Fujio Masuoka in the early 1980s while at Toshiba and introduced it to the market in 1984. It was also later developed by Intel. Flash memory is an integrated circuit that does not need continuous power to retain data, but is a bit more expensive than magnetic storage. Today, flash memory is very popular and solid-state drives are a practical replacement for large hard drives if you have the extra money.

Flash memory is sometimes abbreviated as "flash." To help prevent confusion with other meanings of flash, we suggest always referring to this type of memory as "flash memory."

NAND, NOR, and 3D flash memory 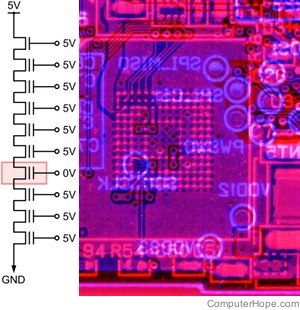 NAND flash is a type of flash memory based on the NAND logic gate.

Similarly, NOR flash is a type of flash memory based on the NOR logic gate.

3D NAND Flash and 3D NOR Flash are flash memory technologies that layer memory cells on top of each other in a stacked planar configuration. They offer persistent, modular storage at speeds comparable to RAM.

Is RAM the same as flash memory?

2. Flash is also an improper name used to describe a USB jump drive.