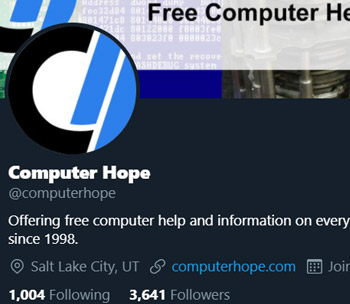 When following someone, each post that person makes is shown on your timeline or feed. Users who are more familiar with Facebook can think of a follower as a friend. However, you can follow anyone on Twitter or Instagram without waiting for them to accept, unless their page is private.

Finally, if you want to stop following someone, you would unfollow that person.

Is it important to have lots of followers?

No, generally speaking, most of the people who have millions of followers are already celebrities or famous without social media. In some cases, however, this follower count is artificially inflated by automated accounts or professional manipulation. While total follower count is indicative of popularity, the quality of followers is equally important. A follower with a large network of their own, in the demographics most sought-after by advertisers, contributes greatly to your social media reputation. The followers you want are those who read your tweets and are generally interested in your post, who share your posts with their equally valuable followers.

Although you can get more followers by following lots of people, most active users only follow accounts that have more followers than they do. Also, most people who see an account following hundreds of thousands of people realize that no human could ever read all their follower's tweets or posts.

How can I get more followers?

The best tip to get more followers is to be active, and make your posts interesting and something your followers want to continue to see. For tips about gaining Twitter followers, see our top 10 Twitter tips.

What does it mean when it says "Follow us" on a web page?

A website may suggest its viewers to follow them on one of the social networks they participate in to help keep informed about a company, product, or service. For example, if you are a Facebook user, you can follow Computer Hope to get updates on the site and helpful computer-related information.