Function may refer to any of the following:

1. In general, the functionality of something refers to the overall quality and how well something performs. For example, a software program may have improved functionality over previous versions with new features and options that were not available in past versions.

2. In mathematics, a function is a relationship between two mathematical statements, or sets of numbers, where every element of one corresponds to the other. For example, in the function f(x) = x + 1 (pronounced "F of x equals x plus one"), every number, x, corresponds to exactly one other number, that is greater than x by exactly 1.

3. A function is a group of instructions, also known as a named procedure, used by programming languages to return a single result or a set of results. See the routine and library definitions for further information.

4. Excel functions are designed to provide one word access to multiple operations. There are several dozen functions and they are organized according to their purposes. For example, in the excel formula "=SUM(A1:A10)," a function that adds all the numbers in the range of cells specified in the formula. You can go to the Formulas tab (in Excel 2010) or click the formulas button and see all available functions as shown in the example below. 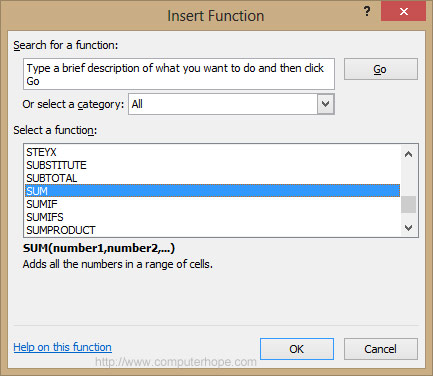