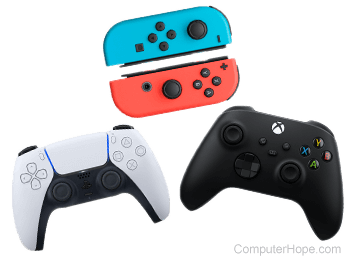 A gamepad, game controller, joypad, or video game controller is a peripheral device designed to connect to a computer or console gaming system. It has multiple buttons and may have one or two mini joysticks. A gamepad is used for playing video games of many types, including sports, first-person shooters, role-playing, and others. The picture shows different examples of gamepads for the computer and consoles.

A gamepad is the primary peripheral device used on console gaming systems, like the Xbox, PlayStation, and Nintendo platforms. Some portable gaming systems have a gamepad built into the gaming device itself, like the Nintendo Switch. Many gamepads are also made to work with a computer, often using a USB connection.

Some gamepads featuring haptic feedback allow a user to feel some of the action in the game, by vibrating the controller.

The first gamepad was introduced in 1985, first by Nintendo, then by Sega, for use with their video gaming systems. Since then, many forms of gamepads have been made and sold, but all still have a similar design.

The term "game controller" is also used to describe any input device used to play games. Game controllers could include gamepads, joysticks, steering wheels, paddle, and the keyboard and mouse.