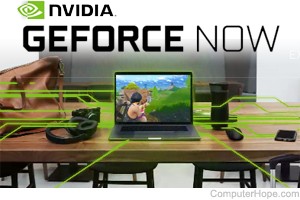 GeForce Now is the name of a cloud gaming service operated by NVIDIA, formally announced on September 30, 2015. It enables users to rent time on a powerful cloud computer, equipped with an NVIDIA Tesla GPU. The user plays the game on their computer or NVIDIA Shield HD video device, and the inputs are sent to the remote computer. The graphics processing and game logic are performed on the server, with audio and video streamed to the user's device in real-time.