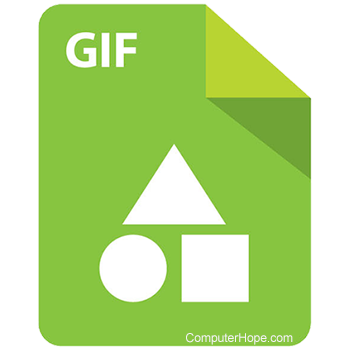 Pronounced jiff and short for Graphics Interchange Format, GIF is a file extension and a bitmap graphics file introduced by CompuServe (primarily Steve Wilhite) in 1987.

On December 24, 1994, Unisys and CompuServe announced that they expected licensing fees for software that creates and displays GIF images. The thought of fees caused hysteria among developers and website owners using GIF images. Because of potential future GIF taxes, this hysteria led to the development of the PNG format. The Software Freedom Law Center announced after October 1, 2006, all patent claims interfering with the employment of the GIF format expire and users should have no concerns using the format.

How do you pronounce GIF?

The creator of GIF (Steve Wilhite) pronounces GIF as "JIFF" (a soft g), like the American Jif peanut butter brand, not "GIF."

What opens a GIF or .gif file?

Every image editor, paint program, and image viewer is capable of opening and viewing a GIF file. See the document below for a listing and examples of image editors that are capable of viewing and editing GIF files.

Should I save my image or photo as a GIF?

Deciding what image type to use when saving an image or photo depends on your requirements. If the image you're saving is a basic image with no gradients and not many colors (e.g., a logo or illustration) and you're concerned about file size we recommend using GIF. However, if you're working with a more complex image or photograph, we recommend saving it as a JPEG or PNG.

Should I write "GIF" in all uppercase?

Yes. GIF is an acronym that should be written as all uppercase.