A hash may refer to any of the following: 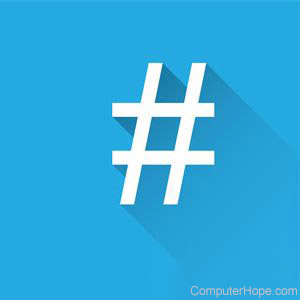 1. When referring to Perl, a hash is an associative array. In Perl, hashes are represented with the prefix %. They contain a listing of keys and values. Below is an example of a basic Perl hash.

In the above example, the program sets the hash table and then prints the hardware hash, which is equal to the next hash element. Therefore, the program would print "Hardware hash = Monitor" on the command line.

4. When referring to a database or encryption, see our hashing definition for further information on these terms.

5. FTP command that turns on/off the displaying of a hash mark ( # ) for each 1,024 bytes of data received when getting a file.