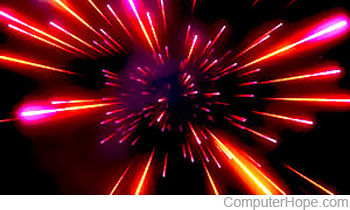 Sometimes abbreviated as HT, HyperTransport is an open replacement for the computer FSB, and other legacy bridges and buses originally developed by AMD. HyperTransport was code-named LDT (Lightning Data Transfer) and today is used in computers, servers, and other high-performance networking and communications equipment.

HyperTransport should not be confused with Hyper-Threading, which is an Intel technology.

HyperTransport was first introduced on April 2, 2001. The initial release of HyperTransport had a top signaling rate of 1.6 GHz on each wire pair and a peak aggregate bandwidth of 12.8 Gbps.