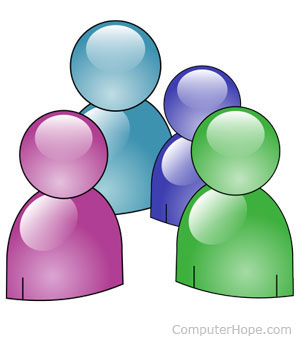 IM is short for instant message, which is a message directly sent from one person to another. IM is also short for Instant Messenger, which is a program that connects users to the Internet or network to send text messages. When used as a verb, IM (instant messaging) is the act of sending a message and chatting in an IM program.

The term "Instant Messenger" is a trademark owned by Time Warner that should only be used when describing AOL IM software.

Unlike chat with multiple people talking at once, IM requires an IM client (program) and only lets you directly talk with someone online and in your buddy list. With these programs, you are notified when a friend is online and available to chat.

Below is a short list of IM software that is or was available for a computer. In the early 2000s, instant messenger programs became less and less popular as social networking sites, like Facebook and Twitter, began using social messaging apps. Today, most instant messaging happens through social network apps.

The image is an example graphic of what ICQ looked like, which was one of the first widely used Internet instant messenger programs.

Because the companies supporting and developing IM software are competitors, there often is no compatibility between them. If you're on AIM and you have a friend using MSN, you cannot talk together. Programs like Trillian and Gaim (now called Pidgin) were created to allow users to have any instant messengers in the same program. However, these types of programs still operate over different networks.