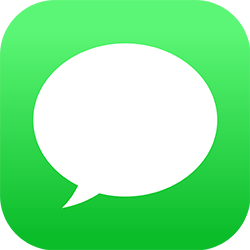 iMessage is an instant messaging service created by Apple. Its client program is called Messages, which is supported by their operating systems beginning with iOS 5 and macOS Mountain Lion.

The client program, Messages, shows an indication when the other user is typing. It also allows conversations to span across devices. A user can start a conversation on one device (such as the iPhone) and continue it later on another device (such as an iPad). All iMessages are encrypted and use the APNS (Apple Push Notification Service) protocol.