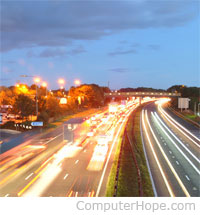 The information superhighway is a term coined by Vice President Albert Gore while giving his speech on January 11, 1994. It was originally used to describe the future of computers accessing and communicating over a worldwide network. Later during a CNN interview, Gore stated "During my service in the United States Congress, I took the initiative in creating the Internet." This statement helped spark the belief that Al Gore invented the Internet when he didn't.