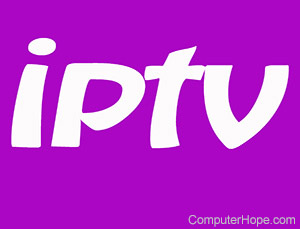 Short for Internet Protocol television, IPTV is a technology for watching television using Internet Protocol over LAN or the Internet, instead of over cable or satellite. IPTV has an advantage over downloaded media in that it can stream directly from the source, in smaller chunks of data. This effect is known as streaming media.