ISIS may refer to any of the following: 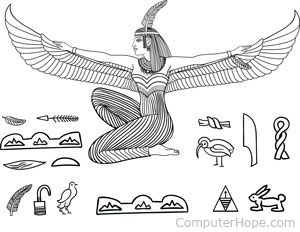 1. Image and Scanner Interface Specification, an open standard for interfacing scanners with computers. ISIS was first developed in 1990 by the company Pixel Translation, which today is known as EMC Captiva.

2. IS-IS (pronounced "I-S-I-S"), a gateway protocol for internal use within an administrative domain or network. It is used by routers that create a database of a network's topology, calculate the best paths using Dijkstra's algorithm, and forwards packets over the network based on those best paths.

3. ISIS/Draw, a drawing program for Microsoft Windows which specializes in the illustration of the structure of chemicals and molecules.

4. Isis Mobile Wallet, a mobile payments platform which uses near field communication to allow users to conduct financial transactions using a smartphone at a point of sale. Later renamed Softcard, Isis Mobile Wallet was launched in 2013 as a joint venture between AT&T, T-Mobile, and Verizon. It was then acquired by Google, and by March 31, 2015, Softcard customers were transitioned to Google Wallet.

5. CDS/ISIS, a software package for information storage and retrieval systems, first released in 1985. It was developed and maintained by UNESCO (the United Nations Educational, Scientific and Cultural Organization). The software can be used for any general purpose, but is primarily used to catalogue books in small-to-medium-sized libraries.

6. Avid Unity ISIS, also known as Unity ISIS or infinitely scalable intelligent storage, is a storage system for high-quality, often uncompressed, audio and video. ISIS is used by television broadcasters, non-linear editors, and production specialists, and can store up to 384 terabytes of data, or 196 terabytes in mirrored RAID mode.

7. Integrated software for imagers and spectrometers, software used by NASA to process the images and spectral data obtained by missions to planets within our solar system. ISIS also has 2D and 3D image processing capabilities for rendering planetary maps based on the images and data it receives.

8. ISIS, an operating system developed by Intel in 1976 for its 8080 and 8085 lines of processors. The OS used a command-line interface similar to Unix, was packaged with special editors, linkers, compilers, and debuggers for software developers.