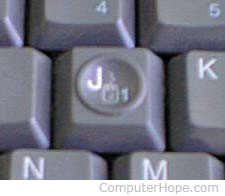 Alternatively referred to as a JMouse or J Mouse, a J-Mouse was used with older portable computers. It utilized the "J" key on the keyboard to perform the functions of a standard computer mouse. It commonly had two separate buttons for the left and right-click below the spacebar. As seen in the picture, the Zenith or ZDS Z-Star EX keyboard J-Mouse is uniquely identified with a picture of a mouse and an indented circle. It can be identified visually and physically from the other keys on the keyboard.

The following image is an example of the left and right mouse buttons found on the laptop computer. 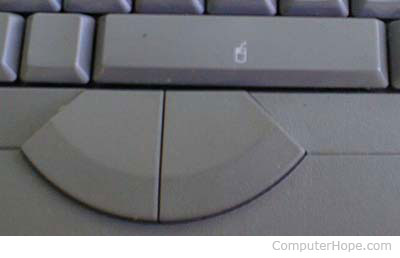 Because of its difficulty to use and better technologies that were later introduced, this mouse is no longer utilized. We would like to thank Chris from ZDSParts for supplying us with a clear picture of the Z-Star EX laptop.

The J-Mouse should not be confused with the TrackPoint eraser head mouse still used on some laptops.