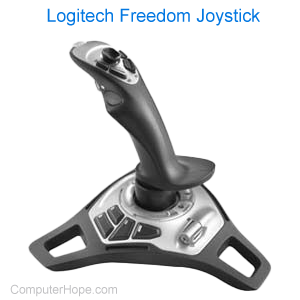 A joystick is an input device that control a character or machine in a computer program, such as a plane in a flight simulator. They look similar to the control device you would find on an arcade game, but nearly always include extra buttons for additional functionality. The picture shows the Logitech Freedom 2.4, an example of a joystick.

When was the first joystick invented?

The first joystick was invented at the U.S. Naval Research Laboratory by C. B. Mirick and patented in 1926. It was a two-axis electronic joystick, similar to the joysticks in use today, and was original designed for remotely piloting aircraft.

Today, most computer joysticks connect to the computer using a USB port. Below is a listing of all of the type of ports that have accepted a joystick.