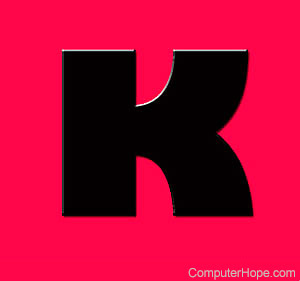 K may refer to any of the following:

1. A k is short for kilobit and kilobyte.

2. K is a keyboard key used with the keyboard shortcuts Alt+K, Command+K, and Ctrl+K.

3. K is chat slang for ok, which is also sometimes abbreviated as kk.

4. With Microsoft Excel and other spreadsheet programs, "K" is the eleventh column of a spreadsheet. To reference the first cell in the column, you'd use "K1."

5. In the phonetic alphabet, "K" is often pronounced as "kilo."

6. K is the eleventh letter of the English alphabet. The letter "K" comes after "J" and is followed by the letter "L." To create a capitalized "K," press Shift and K at the same time.

With U.S. QWERTY keyboards, the "K" key is on the home row, to the right of the "J" and left of the "L" key. See our keyboard page for a visual example of all keyboard keys.

If the "K" key is not working on the keyboard, see: Some of the keys on my computer keyboard aren't working.