Kill may refer to any of the following: 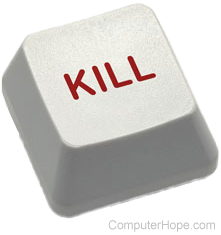 1. Kill is a command with Linux and Unix variants and various network equipment to stop a process or disconnect a client. For example, on a Linux server, the admin may need to kill a process consuming too much memory.

2. In general, kill describes deleting or removing data from a computer.

3. With a game, kill is when a player, NPC, or the environment damages someone so much that their character's life is ended. In most games, after being killed, the character is respawned and may suffer a penalty.

A kill may also be called a frag.