Lag may refer to any of the following: 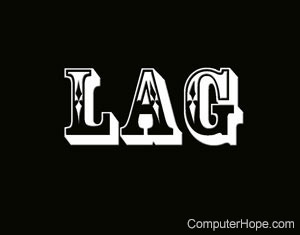 1. In general, lag is the time difference a performed task and its result. For example, the fraction-of-a-second pause between the time a keyboard key to when it appears on the screen.

2. In gaming, lag refers to any noticeable slow response in an online game due to high latency or a poor connection. For example, on a slow Internet connection your character or the environment they're in may stutter.

If lag only happens temporarily, this is referred to as a lag spike.

Lag is most often referred to the lag you get from an Internet or network connection. However, it may also be used to describe any slow performance you get from a game or other program that doesn't run smoothly.