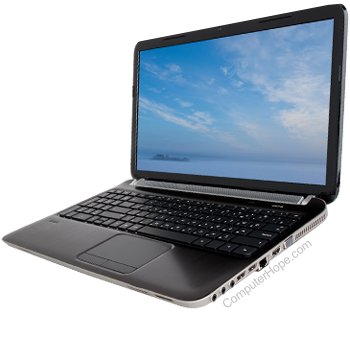 Alternatively referred to as a notebook, a laptop is a portable computer that is more efficient, and nearly as powerful, as a desktop computer. Portable computers run off AC power or batteries, such as NiMH, NiCad, or Li-ion packs, for several hours.

As shown in the picture, the Dell Latitude D610 notebook has everything needed for normal operation. It has an LCD screen, keyboard, and touchpad. Although a laptop may have multiple external devices and cables connected to it, no external connections are required for standard usage.

Today, most laptop computers are becoming thinner and lighter to help compete with other devices, such as tablets. Some laptops may be also be referred to as a notebook computer.

Intel sells a line of ultra-thin laptops under the name Ultrabook.

The first laptop or portable computer 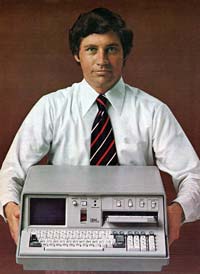 The IBM 5100 is the first portable computer, which was released in September 1975. The computer weighed 55-pounds and had a five inch CRT display, tape drive, 1.9 MHz PALM processor, and 64 KB of RAM. In the picture is an ad of the IBM 5100 taken from a November 1975 issue of Scientific American.

The first truly portable computer or laptop is considered to be the Osborne I, which was released in April 1981 and developed by Adam Osborne. The Osborne I weighed 24.5-pounds, had a 5-inch display, 64 KB of memory, two 5 1/4" floppy drives, ran the CP/M 2.2 operating system, included a modem, and cost $1,795.