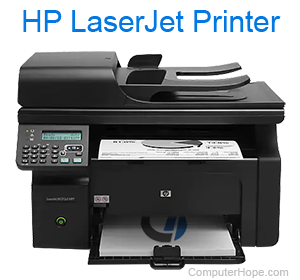 The laser printer was first developed at Xerox PARC by Gary Starkweather and released in 1971 that utilizes laser technology to print images on the paper. Laser printers are often used for corporate, school, and other environments that require print jobs to be completed quickly and in large quantities. The picture is of an HP LaserJet printer and a good example of a laser printer. As the image shows, a laser printer is usually larger than an inkjet printer found in most homes.

How a laser printer works and its printing steps

Below is a chart of the steps a laser printer takes to print.

This process removes the prior image information and toner from the drum.

The corona wire applies a uniform, positive charge to the photoreceptor drum.

The image to be printed is drawn onto the drum using a laser to "carve-out" positive charges and leave behind negative ones. As an aside, the laser in the printer uses light sources, like LED (light-emitting diode) or LCS (liquid crystal shutter).

The toner in the ink roller is ionized with a positive charge, attracting it to negatively charged areas on the drum.

The drum's toner is transferred to the paper by either a positively ionized field (created by a transfer corona wire) or a transfer roller in newer printers. The toner is not yet permanently set on the paper and requires the last stage.

Heat and pressure are applied to the paper and toner by two fuser units. The toner melts and is pressed into the paper like doing an iron-on transfer to a T-shirt.

Is a laser printer an output device?