Leak may refer to any of the following: 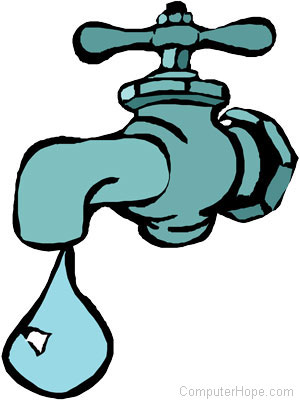 1. A term used to describe a software issue that causes the computer or hardware device to lose resources that are no longer in use. A leak may be caused when a program does not close properly or by a bug. Commonly, the term leak describes a memory leak, which is a software program that does not release memory resources, or retains information no longer being used.

How to tell if your computer has a memory leak

When a leak occurs, you see a drop in your computer's performance or hardware device. For example, with a memory leak, the program may continue to consume the memory until it is exhausted or causes a crash. Microsoft Windows users can identify memory leaks by opening the Windows Task Manager; if a program's "mem usage" never stops increasing, it's likely that the program is exhibiting a memory leak.

How to fix a memory leak

A leak may be temporarily resolved by closing and restarting the program or rebooting the computer or hardware device. To resolve a leak permanently, a patch needs to be installed.

2. With computer security, a leak is a release of confidential information. For example, Edward Snowden leaked classified information from the NSA to mainstream media in 2013.