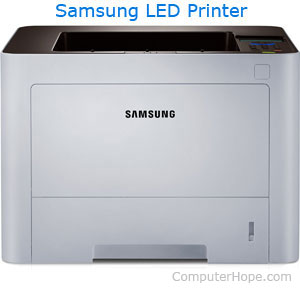 Similar to a laser printer, LED printers are non-impact but use a light-emitting diode instead of a laser in the printhead. LED printers were initially developed by Casio and function by focusing light across the entire length of the drum, thus creating areas that are less charged, which attracts toner. The printer then transfers the toner from the drum to the paper and applies intense heat to fuse the toner to the paper.

Advantages of owning an LED printer compared to a conventional laser printer including higher efficiency and reliability. LED printers have no moving parts in the printhead, which makes them inherently more durable over time.

An LED printer should not be confused with an LED on a printer that indicates the printer has power.