A light pen may refer to any of the following: 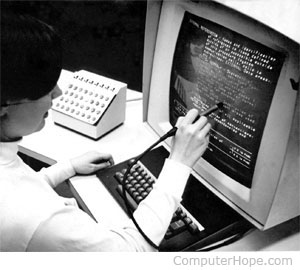 1. A light pen is a light-sensitive pointing input device commonly used to select or otherwise modify text or data on a screen. Used with a CRT monitor, these devices were an early form of manipulating and highlighting data on the screen. In the picture, is an example of a woman using a light pen to highlight text on the screen.

Light pens were originally developed around 1955 and in the 1960s, they became more commonly used with graphics terminals, like the IBM 2250. In the 1980s, light pen usage expanded to home computers, like the BBC Micro computer. Some graphics cards also included a connection for a light pen.

Today, light pens are no longer used due to the invention of touch screens.

2. The term light pen may also refer to a pointing input device utilizing a light that is commonly used during a presentation. The light pen is a very focused flashlight-type of device or a laser pointer. It may be used to direct viewers' attention to a specific area, such as a picture or text in a presentation.

3. A light pen may also be used to describe the pen (stylus) used with a graphics tablet.