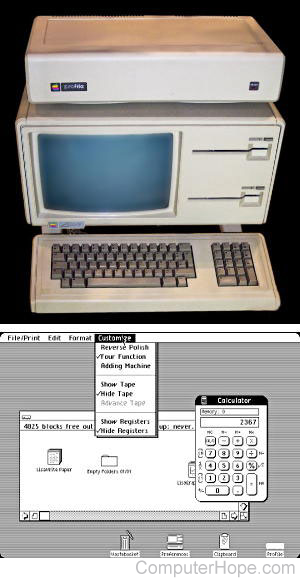 The Apple Lisa, also known informally as the Lisa or Lisa computer, was a personal computer manufactured by Apple beginning on January 19th, 1983. It directly preceded the first Mac, the Macintosh 128 k, but the Lisa was a more advanced and powerful computer. The name "Lisa" officially stood for "Locally Integrated System Architecture," but Steve Jobs later admitted that the computer was named after his daughter, Lisa. Therefore, it is a backronym.

The Lisa computer used protected memory, preemptive multitasking, a hard disk drive, and supported up to 2 MB of RAM. Some of these features were extremely advanced for the time; for instance, protected memory did not appear in macOS until the early 2000s. The Lisa also used a mouse, and a GUI that used a desktop metaphor for working with files and programs. These new features for a personal computer of this era were inspired from the Xerox Alto computer.

The Lisa sold only about 100,000 units, due to its high cost and was considered a failure. As a result of internal conflict, Jobs was forced off the project. He ended up working on the Macintosh instead, which ultimately was a huge success.