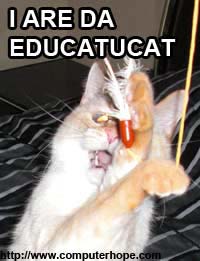 Lolspeak is a form of speaking that doesn't use proper English, often using a "z" instead of an "s" and re-arrangement of syntax. For example, someone may say "I can haz cheezburgr?" in lolspeak instead of saying "Can I have a cheese burger?" while typing. Lolspeak is also referred to as lolcat because it is often attached to pictures of cats, as shown in the picture.