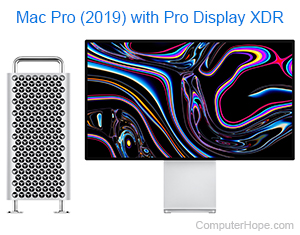 Initially introduced on August 7, 2006, the Mac Pro is a professional, high-end line of Apple desktop computers that run the macOS. Unlike other computers in the Mac lineup, the Mac Pro is not an All-in-One computer, which means it requires an independent display. Mac Pro computers have the best specifications offered by the company and are sold at the highest price point.

The latest Mac Pro starts at $5999, and reaches $45,000 with all the upgrades, including the new monitor and stand (details below).

The latest Mac Pro, announced on June 3, 2019, features the following base specifications, which are upgradable via proprietary modules:

Versions of the Mac Pro

Each version of the Mac Pro is referred to by the year of its release.