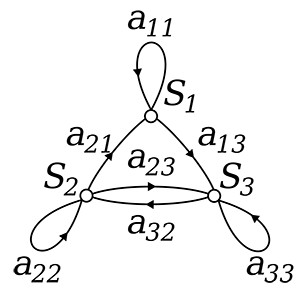 A Markov chain is a data model used in computer science. It stores information as a sequence of states that are "chained together" by rules of probability. In computer programming, Markov chains are useful when building records that change progressively over time. They are named after early 20th century mathematician Andrey Markov.

In a Markov process, the current state (status) can be expressed as a transition probability from the previous state, and no other states need to be known. All possible transitions from one state to the next are mapped to a matrix, which can be efficiently calculated and stored.

Technologies that use Markov chains include bitcoin, Google PageRank, and Git.