Messenger may refer to any of the following:

2. Alternatively known as MSN Messenger and Windows Live Messenger, Messenger is a software program from Microsoft for Windows that allows a user to chat online (Internet) with other users. Messenger is similar to text messaging, but on a computer rather than a cell phone. Users can also video chat if both users have a webcam connected to their computers.

Users are added to a contact list, then can be placed in various user-defined groups for easier viewing and sorting. Permission from a user is required before they can be added to another user's contact list. Below is an example of MSN Messenger, with the contacts list shown on the right and the current chat conversation shown on the left. 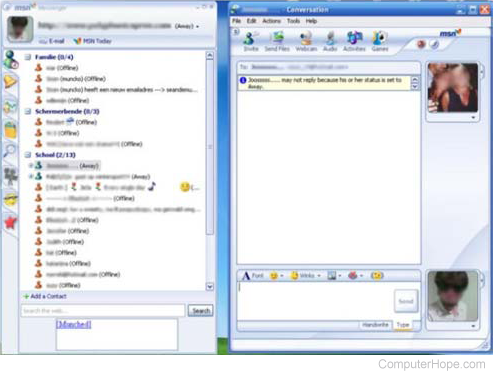 On March 15, 2013, Microsoft discontinued Messenger in favor of Skype.

3. Yahoo! Messenger is an IM (Instant Messenger) program developed by Yahoo! that allows a user to chat online with others in their contact list. Users could install Yahoo! Messenger on their computer, and log in using their standard Yahoo account.

Originally released on March 9, 1998, as Yahoo! Pager, it was later renamed to Yahoo! Messenger in 1999. As texting and social media became more prolific, instant messaging saw a rapid decline in its user base. As a result, Yahoo! officially shut down Yahoo! Messenger on July 17, 2018.