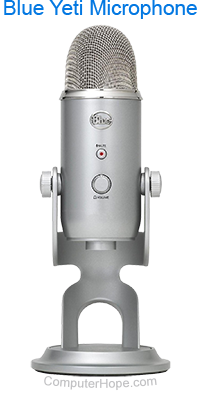 Sometimes abbreviated as mic, a microphone is a hardware peripheral and input device originally invented by Emile Berliner in 1877. A microphone allows computer users to input audio into their computers. Pictured here is a Blue Microphone's Yeti USB microphone - silver edition, an example of a high-quality computer microphone.

What is a microphone used for on a computer?

Below is a list of the most common uses for a microphone on a computer.

Where is the microphone plugged into a computer?

More advanced microphones, like the Yeti microphone pictured above, connect to the computer using USB.

The microphone port is usually marked with an icon of a microphone, as pictured. The port may also be labeled "mic." If the port connectors are color-coded, the pink connector is usually the microphone port. See our sound card page for further information about these ports for desktop computers. For a full listing of computer-related symbols, see: What are the most common symbols used by computers?

What type of microphones are available?

Below are the most common types of microphones and how they are used.

A unidirectional microphone is any microphone that picks up sound in one direction. This type of microphone is helpful for when someone only wants to record one thing, such as their voice when doing a podcast or voice-over.

A close-talk microphone is designed to have someone's mouth near the microphone without creating noise that may occur with other microphones. These microphones are used with a headset and phones, and are great for voice-recognition software.

Also known as a lavalier microphone, a clip-on microphone is a hands-free wireless mic that clips to the user's shirt.

Why is a microphone considered an input device?

Because a microphone sends information to a computer, it's considered an input device. For example, when a microphone records a voice, the audio is sent to the computer and stored on the computer's hard drive. Once the recording is stored as an audio file, it can be played, edited, and shared.

Microphones are essential to voice recognition technology, which uses your voice to issue commands to the computer and execute specific tasks. Examples of this technology are digital assistants, like Cortana, Siri, and Google Assistant.