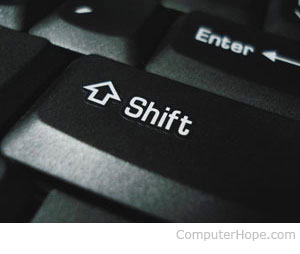 A modifier key is a key on a computer's keyboard that's only used in conjunction with another key. Modifier keys are often used with other keys to perform computer keyboard shortcuts and other commands. For example, in many text editor programs pressing the Ctrl+A selects all text.

Modifier keys should not be confused with the Mod key.

On an IBM compatible computer, modifier keys include Alt, Ctrl, Shift, and the Windows key. On the Apple Macintosh computer, the Control, Option, Command, and Shift keys are modifier keys.

Additionally, most laptop and some desktop keyboards contain an Fn modifier key. Also, some special keyboards may have an additional MOD or Super key that can be used as additional modifier keys.

If you have difficulties pressing and holding a modifier key while pressing other keys, you can enable the sticky keys option in Windows.