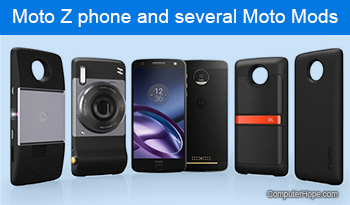 Initially released in 2016, the Moto Z is a line of Android smartphones manufactured by Motorola. The phone introduced the unique capability of attaching a large variety of proprietary accessories (called Moto Mods) to the device. Moto Mods affix to the back of the phone, adding functionality to it. They are interchangeable based on the user's needs.

Versions of the Moto Z