Any game that allows more than one player is considered multiplayer. A multiplayer game is most often played over the Internet, however, could be also a game played over a LAN (local area network) or dial-up connection. Split screen multiplayer gaming is popular with consoles, but usually only allows between two and four players.

Most multiplayer games connect players together via a multiplayer server, which lists all available online games and allow players to connect to a game or create a new game for others to join. Although main game servers are controlled by the developers, many games allow users to create and control private servers.

Each game and their respective layout vary, so the number of players who may join does as well. Most games support between 5 and 50 players simultaneously, while MMO (mass multiplayer online) games can support several thousand.

The picture is an example of a multiplayer experience called a LAN party. Here, hundreds of gamers have brought their computers to a central location and connected them together over a network, allowing them to compete. 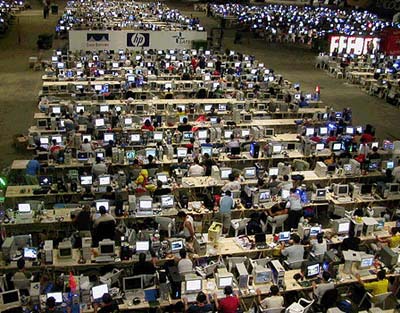