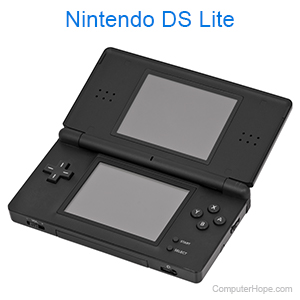 Originally released in 2004, the Nintendo DS is a series of portable game consoles sold by Nintendo. The handheld form factor utilizes two screens, one being stylus-based for controlling and writing, and the other acting as the game display screen. The Nintendo DS also has buttons and a D-pad similar to more traditional game console controllers. The Nintendo DS family of gaming products is characterized by its original proprietary games using popular Nintendo properties, like Mario, Pokemon, and Zelda.

The portable aspect of the Nintendo DS family of gaming products was succeeded by the Nintendo Switch, which can be used in both home console and portable handheld modes. It also includes motion control features found in their home gaming consoles, like the Wii and Wii U.

Versions of the Nintendo DS