The 20-key keyboard, also sometimes called half-QWERTY, is designed similarly to the standard QWERTY keyboard used with computers. Most of the keys include two letters on them, and either a number or symbol (exclamation point, question mark and at (@) symbol). Other functions included are Caps Lock, Shift, Spacebar, Backspace, and Return key. 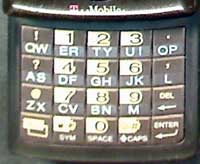 Today, the 20-key keyboard is most often associated with the keypad on a typical phone that includes numbers, letters, enter, and other functions. The picture is a typical 20-key keyboard found on a cell phone.

With a computer, the 20-key computer keyboard is usually compact enough to be used one-handed and may be used vertically. While most often found on electronic devices, a 20-key USB keyboard can also connect to a computer. Some of these keyboards are also designed to be programmable, instead of featuring the standard half-QWERTY design.