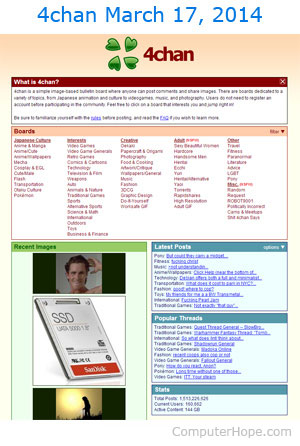 4chan is an anonymous message and image-sharing board started by Christopher Poole (aka moot) on October 1, 2003. Almost all users post anonymously, and registration is not required (or even possible) for new users. 4chan features a variety of different boards that range from anime, manga, music, random, photography, to adult content. The site helped create such groups as the Anonymous hacking group, created memes such as lolcats and Rickrolling, and hijack Internet sites as pranks.

Some of 4chan's users were in the news because of bomb threats, pranks, hacks, and child pornography. The site has also been temporarily blocked by AT&T and Verizon, preventing all its users from accessing the site.