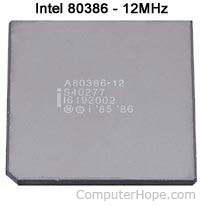 The Intel 80386SX processor was introduced in 1988 as a low cost alternative to the original 386 processor. The 80386SX lacked a math coprocessor but still featured the 32-bit architecture and built-in multitasking. The chip was available in clock speeds of 16 MHz, 20 MHz, 25 MHz, and 33 MHz.

The 80387DX is a mathematical coprocessor created by Intel for their i386 line of CPUs. It permitted the i386 to perform floating-point arithmetic in hardware, greatly improving the speed of calculation for those specific operations. The 80387dx was released in 1987, two years after the first i386 processors.

The 80386SL, more commonly known as the 386SL, was a version of Intel 386DX microprocessor first manufactured in 1990 featuring low power consumption and was used mainly in portable computers.

Finally, the 80387 was the math coprocessor used with the Intel 386 processors.

Some 386DX 16 MHz Intel processors had a small bug, which appeared as a software problem. The bug occurred when running true 32-bit code in a program such as within OS/2 2.x, Unix/386, or Windows in Enhanced mode. The bug would cause the system to lock up and is a difficult issue to determine without having Intel look at the chip. Chips that passed the test, and all subsequent chips that were bug-free, were marked with a double sigma symbol. 386DX chips that are not marked with either of these symbols may have not been tested by Intel and may be defective.