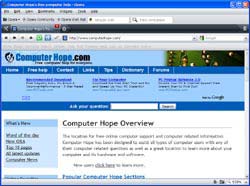 Opera is an Internet browser developed by Opera Software and was first released on April 1, 1995. Designed for desktops and mobile platforms, including a popular choice for mobile phones. Opera claims to be the fastest browser on earth and has a free e-mail client known as Opera Mail. The picture shows Opera 9.6 web browser with the Computer Hope website. Some of the popular features of Opera are its speed, tabbed browsing, pop-up control, and voice control.

Older versions of the Opera browser featured File/Edit/View menus for accessing the various features and functionality of the browser. Newer versions have a single menu feature located at the top-left of the browser window, which replaces the File, Edit, View menus.

How to open Opera

The Opera browser does not come pre-installed on any computer. If you're using Microsoft Windows or an Apple computer, see: How to install or uninstall the Opera browser. Once Opera is installed, you can open it like any other program on your computer.

What is Opera Mini?

Officially released on August 10, 2005, Opera Mini is a mobile version of Opera that today is only designed only for Android smartphones. The Opera Mini browser can be downloaded from the Google Play store.

In the past, Opera Mini was available for iPhones and other mobile platforms.

What is Opera beta and Opera Next?

Formerly called Opera Next, announced on May 27, 2013, Opera beta is a version that allows users to test upcoming features to be introduced in future versions of Opera.

You can run Opera and Opera beta at the same time. Each version has a different icon to help distinguish between the two versions of Opera.