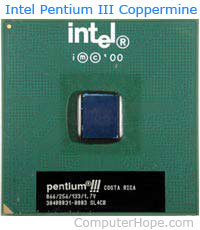 The Intel Pentium III 500 MHz with a 100 MHz FSB code-named Katmai was introduced on February 26, 1999, and initially continued to use the Slot 1 as its connection to the motherboard. With proper BIOS support, this processor could also be used on older Pentium II motherboards. The Pentium III released to controversy about privacy with the announcement of each processor having a unique identification to help verify the identity of people over the Internet. Because of the concern, Intel disabled this feature by default.