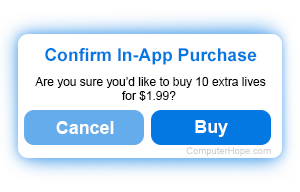 Pay-to-win, abbreviated as P2W, describes an aspect of a game where players are allowed to get an advantage with real-world currency to purchase in-game items. The pay-to-win structure is prevalent in both multiplayer online games through DLC (downloadable content) and mobile games through in-app purchases.

Pay-to-win games usually offer better weapons, armor, character abilities, or in-game currency to players as microtransactions. The pay-to-win advantages make it harder for other players to compete if they cannot afford or do not want to purchase the same items. As the definition would imply, players essentially pay to win at a game.

Games that allow players to download the software for free (freemium) are the most common type to be considered as pay-to-win. Many free-to-play games offer microtransactions to generate revenue for the developers, but can fall into the trap of being pay-to-win, angering existing and potential players. To combat the pay-to-win model and negative viewpoint from players, some game developers only offer cosmetic items for purchase, or other items that don't provide gameplay advantages.

Popular games with some pay-to-win options include the following: