PCB may refer to any of the following: 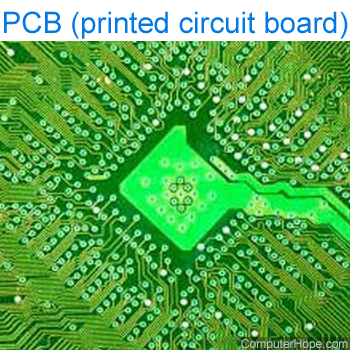 1. Sometimes abbreviated as a board, a PCB is short for printed circuit board and was invented by Paul Eisler while working on a radio in 1936. A PCB is made of plastic or fiberglass that holds ICs and other components. An example of a PCB found in all computers today is the motherboard. The circuit board is often green from the solder mask that coats the board, however, it can be another color, including red, blue, or even black. The picture is a close-up of a printed circuit board.

What is the biggest circuit board in a computer?

In a desktop computer, the motherboard is the largest circuit board that connects to and communicates with all other boards and devices.

What are the boards that connect to a motherboard?

In a desktop computer, expansion cards can be added to a computer to upgrade (e.g., a sound card or video card) or add new functionality to a computer (e.g., a video capture card).

What is on a circuit board?

2. PCB, which is also short for process control block, is a structured data package that holds information about a computer process. Sometimes called a process descriptor, the operating system creates a PCB when a new process is started. The operating system then uses the PCBs to manage all active and suspended processes.

Components of a process control block

Process control blocks are stored in a protected area of computer memory, to protect them from corruption or being overwritten with other temporary data.