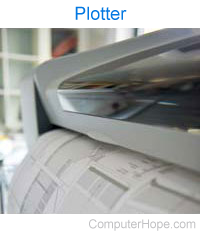 A plotter is a computer hardware device much like a printer that is used for printing vector graphics. Instead of toner, plotters use a pen, pencil, marker, or another writing tool to draw multiple, continuous lines on paper rather than multiple dots, like a traditional printer. Plotters produce a hard copy of schematics and other similar applications. Though once widely used for computer-aided design, these devices were more or less phased out by wide-format printers.

When was the first plotter invented?

The first plotter was invented in 1953 by Remington-Rand. It was used in conjunction with the UNIVAC computer to created technical drawings.