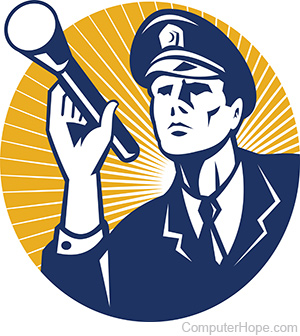 A portmanteau of "police" and "software," policeware is software that's secretly installed on a suspect's computer. The goal is to allow government agencies and law enforcement officials to monitor digital communications like e-mails and text messages.

The first instance where U.S. citizens became aware of the use of policeware was a software package named Carnivore, released in October 1997.